Luxury rental town houses in the heart of Cómpeta

What is Noche del Vino?

Noche del Vino translates to Night of the Wine and is a traditional festival of Competa. Celebrated on the 15th of August each year, it is the perfect opportunity to experience the history of Competa.  The celebrations began in 1973 and was a farewell to those who were leaving the pueblo to attend the harvests in the countryside. The workers would not return for a couple of months when the harvest of the grapes and raisins had finished. The Andalusian government declared this special night a fiesta de Interés Turístico Nacional de Andalucía in 1999.

What can you expect?

Festivities begin with a procession to celebrate the arrival of the grapes.  Here you will see the Fandangoes accompany the procession to Plaza Vendimia. A wonderful tradition, this is where the treading of the grapes commences and is a joyous celebration for all ages.

Throughout the day, a medieval market runs from Plaza Vendimia down to the main square, Plaza Almijara. Adorned with colourful flags, the route and many side streets make for a wonderful spectacle.

Watch a video of the 2019 event here from AxarquiaPlus TV

Free food and drink for all

Those attending are treated to one of the local specialities Competa wine. The wine is made across the region by both commercial vineyards and locals.  You will see many grape drying beds on the mountainside. They are the white oblong boxes where the grapes are dried in the hotter months and turned into juicy plump raisins.

During this festival, you will find they serve Migas, pronounced Miyas which translates in Spanish to breadcrumbs. This popular  dish is a way to use the stale bread and  variations differ across the regions. The base ingredients are breadcrumbs, olive oil, garlic, tomatoes. Next they add Morcilla (Spanish equivalent to black pudding) or Chorizo, or in our region fish.  The dish served at this year’s festival included cod with grapes and salad and was prepared by Paco, of Casa Paco, a fabulous restaurant in the main square.  Paco is famed for catering most of the Ayuntamiento events in the Pueblo – no mean feat as he feeds locals and visitors!

The Muscatel grape is used to make Competa wine, which has a taste similar to sherry.  Similarly, it ranges in colour, with the dry being very pale up to the dark brown Vino Dulce (sweet wine).  Vino Dulce is often too sweet for many palates! It makes a formidable dessert wine whereas the dry version makes a fabulous aperitif and is particularly nice chilled!

As you drive through Competa you will see that Competa wine is sold in many places, not just the supermarkets and bodegas! It is often served from plastic bottles, however don’t let this put you off, there is a variety of Competa wine to suit everyone!

Competa is known as the best wine producer in the area so a visit is recommended. Furthermore one of the most well-known Muscatel wines is the Jarel wine from Bodegas Almijara.  The Bodega is on the road to Canillas de Albaida. Unusually, in the 19th Century the building started life as a factory producing resin where it continued this process until the Spanish Civil War.

Following this the people started to pick Muscatel grapes for the production of raisins, before it transitioned to a Bodega during the 1970’s.  Although today the raisin production is much reduced. In 1993 they began making the Jarel wines they are famous for today and Bodegas Almijara was created. Subsequently in the year 2000, the Denominations of Origin Malaga and Sierra de Malaga awards were given to them. They continue to work tirelessly and they have improved the quality and consistency, they are rightly proud that their wines today are a modern expression of the grape tradition which represents the culture of the area. You can book a Bodegas Almijara tour here!

Celebrations culminate in free evening entertainment in the form of performances in Plaza Almijara. Most noteworthy of the performers was Joana Jiménez who gave a lovely flamenco performance, however all were wonderful!

After the eventful day, the dancing and celebrations continue throughout the night. The Plaza Almijara remains packed until the early hours. Without doubt this is something you should experience at least once in your lifetime!

No 9 and No 17 are both in the midst of this celebration and should you wish to visit next year, then it is best to book early!

Parking in and around Competa…

You will find when attending this event it is best to park on the outskirts of Competa.  Either at the top of the Pueblo, close to the viewing point near Venta de Palma only about a 5-minute walk to Plaza Vendimia.  Certainly, another alternative is the bottom of the village as you head into the Pueblo.  In addition, you could try near the play park or in the bays on that road, from there it’s about a 10-minute walk up to Plaza Almijara.  However, as the theme of the day is free wine, you may want to take public transport or a taxi and fully enjoy the free wine on offer. 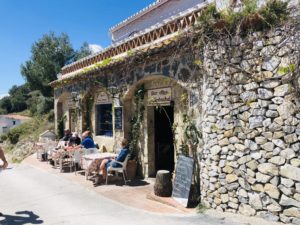 The Lost Village of Acebuchal

Almuñécar – a great place to explore!

Things to do in Almuñécar Almuñécar is on the Costa Tropical, on Spain’s south coast, it is a vibrant town with a