Let us take your breath away!

The beautiful villages around Ithaki House!

Steni, Peristerona, Lysos: These scenic villages around Ithaki House, oozing charm and Cyprus authenticity, are a must see no matter what the season.

The village of Steni is about 6km from Ithaki house and at an altitude of about 235m above sea level. The fields in the surrounding countryside are cultivated with almond, olive and orange trees as well as watermelons, to name a few. Between 1930-1950 and 1960-1975, many of Steni’s residents emigrated to South Africa. many of these ex-pats have now returned to bring a newly found life to the village. In fact, Steni is among the few villages in Cyprus ‘regrowing’ and redefining itself. As folklore goes, the village’s name originates form the village’s location. When the settlement first came to existence it was a narrow community situated on the banks of the river running through the village, and ‘steno’ means narrow in Greek.

Start with a visit to the “Steni Museum of Village Life” to dive yourself into the region’s history. The “Steni Museum of Village Life” is a tribute to all the villagers who lived in Steni during the challenging years, from its founding to the end of the Second World War (1800-1945). Its exhibits include scenes of loom weaving and ploughing, and presentations of tools and equipment, handicrafts, kitchenware, pots and jars and traditional clothing.

Then walk over to the village church and the old school. The village church is dedicated to Agios Tryfonas that according to tradition is the protector of animals and crops. The church was built in 1913 at the place where the first village church of village was found, a small building which was destroyed by fire. Next to the Agios Tryphonas Church is the old elementary school, my dad’s old school! Buzzing with children’s voices back in the 1930s and until the late 1980s, when the school closed due a fall in the village’s population. The schoolchildren now attend schools in Polis Chrysochous. It has been restored and sits closed. The village’s Mouktar is actually  considering turning the school’s building into a library.

As you walk around the village you will, for sure, bump into the Mouktar of Steni, Mr Elias Lambides who would be delighted to show you around and give you first-hand information. Elias was instrumental in transforming Steni to the village that it is today. His love for his homeland and his hard work is evident all around you. Top the day with a refreshing break at the Neromylos Cafe for a local coffee, excellent food and traditional desserts. Engage yourself in discussions with the locals and learn more about the region’s history over a glass of wine, in Neromylos soothing atmosphere

Three km north of the village you can find the Monastery of Chrysolakournas, which dates back to the 12th century. An earthquake destroyed the building in 1953 but part of it was restored by the Department of Antiquities as a three aisled basilica in 1973. Inside you can still see fragments of the 12th contrary fresco of St John the Baptist, and 16th Century frescos of St. George. Evidence of an old settlement with crumbling walls and mounds of stone can be seen all around the monastery.

According to tradition, there was a golden (‘chryso” in Greek) trough (gourna in Greek) in the area hence the name Chrysolakournas, though the “lacuna” comes from the Latin “lacus”, meaning lake. The temple suffered many catastrophes mainly from earthquakes.

The Monastery of Chrysolacournas is the oldest Monastery in the Paphos Region. It was a male monastery up until 1821 when the Turks murdered Sylvester, the head of the Monastery, and the Monastery was plundered. During the Venetian occupation it was the seat of the Paphos Metropolis. Inside the church is a faithful copy of the icon of Our Lady of 1703 that was saved before the monastery was plundered. The original icon is safeguarded in Yiolou village. The church has service every 15th of August, 21st of November and the Tuesday after Easter. If you are around on these dates is worth attending the mass with the locals. After the church, a feast with local produce cooked by ladies from the villabe, is set up at the church yard for all to mingle and enjoy.

Peristerona derives its name from the word peristeri – meaning pigeons due to thousand of pigeons living in the village.

At approximately 300 meters above sea level the soft undulating hills are covered with vines, olive trees, wild flowers and herbs, and fruit trees while most of the locations offer views to the sea and the Akamas Peninsula or to the Evretou dam. It is highly recommended to take the old road from Peristerona to Lysos village and then down to Pelathousa and on to Polis -the drive is absolutely beautiful.

The local church is dedicated to St Mamas and is, like most village churches in Cyprus, located in the centre of the village. The church is nowadays part of the Bishopric of Arsinoe. The local Bishopric headquarters are a magnificent building, housing an interesting Byzantine museum. The museum has an impressive collection of icons metalwork art, characteristic Cyprus embroideries and woodcarvings. The museum is open daily.

Peristerona, Lyssos, Steni are just some of the areas where eagles and fighters of the 1955-59 national liberation struggle were hiding. The dense wild vegetation of the highlands was an ideal choice for guerrilla fighters to set up their hideouts and organize their expeditions and ambushes from there. A monument in the memory of EOKA fighter Evagoras Pallikarides has been erected in this location. The location is particularly loved for being so photo genetic.

A unique shopping experience is waiting for you at the Spice House in Peristerona. Located in the home of Catherine & Joe who begun in the spring of 2013 creating and hand blending a range of quality herbs, spices & essential oils for health and wellness. This place is a gem. Healthy spice and herb blends, wellness blends, essential oils and not only, all hand blended in house without any additives or preservatives. Catherine and Joe open their home to visitors every Friday and Saturday between 10:00-02:00. You can enjoy great hospitality, drinks at the beautiful garden, amazing views and at the same time do your purchases. The Spice House also welcomes guests by appointment on any other days. Just give them a call!

Enjoy this unique shopping experience along with some of the best views Cyprus has to offer while enjoying a complimentary drink on the house …….The Spice House that is! For further information on the Spice House visit their website www.spiceandeasycyprus.com  or their facebook page https://www.facebook.com/spiceandeasycyprus/

Looking for a rest and Cyprus coffee and machallepi? Or a cold beer and a hamburger? Stop at Aroma Café in Peristerona and the amazing Efi will look after you! Near St Mama’s church, you can’t miss it. Open mostly late afternoons and weekends is a very relaxing spot to enjoy a drink and….a game of backgammon!

Less than a 1km from Ithaki House is the village of Lysos, at an approximate altitude of 560 meters above sea level. Lysos existed since the medieval times with legends of the Medieval hero Digenis still told in the area. The name itself has archaic origins and originates from the Greek word “liono” as it was an industrial area for the melting of metals. The archaeological findings here indicate settlements of Greeks from Asia Minor. The village is the largest in the Paphos region, with its territory extending to the peak of Pafos Forest where the local eagles and Cypriot mouflons can be spotted.

In the village center stands the church of “Panagia Chryseleousa”., constructed around the end of the 15th century. The church is believed to have originally been a Latin temple since its two doors are decorated with blazons. The view from the plaza is unique and -westerly -it extends up to the sea of “Polis Chrysochous” and Akamas, while in the east and north one can see the forest that exists in the region.

Take a walk down from the church to see the fountain of Lysos. Historically the farmers used to make a stop there for their donkeys to drink water. It is now an area that is used for wedding receptions and for the annual village festival. There is also a playground which makes the place an oasis of relaxation.

Enjoy a stroll through the little narrow streets as this village remains unchanged through the passing of time with its beautiful stone houses and traditions that are still practiced today. Lyssiotes are very hospitable people. They would be offering you fresh fruit and coffee and one of a kind hospitality. Stop by for early breakfast at Maro’s Place (Maro opens her café every day at 5.30am!) or later for a coffee and a taste of her homemade desserts. Maro and her husband Kypros returned to Lysos after many years in South Africa and are both key figures in the community. You can also have a lovely home-made lunch at Lysos Cafe also in the village center. Taste a selection of home cooked food and/or take away. Their mousakka is absolutely delicious and highly recommended! You can also enjoy refreshing milkshakes and fresh orange juice plus the famous machallepi.

Don’t miss out on the annual festival that takes place mid August. Try the traditional specialties that are only found in villages such as koulouria (cookies with carob syrup) and loukoumades (Greek doughnuts with honey) along with other traditional foods. The village is also known for its unique, traditional delicacy of ‘Maxilles’ – a type of dry fig that is consumed as a sweetener, or eaten with almonds or walnuts.

Ithaki House is a beautiful 2 bedroom holiday home with private swimming pool, in Paphos, Cyprus. Ithaki offers panoramic views of the whole expanse of the Polis-Chrysochou Bay. Overlooking a patchwork of fields of crops, olive and citrus trees all the way to the famous Akamas, our home makes the most of its position with a private balcony swimming pool and terrace. Ideal for couples and small families who wish for peace and tranquility but at the same time in proximity to everything; crystal clear, blue flag beaches or aromatic pine sentenced Paphos Forest all 10 minutes away depending on which direction you wish to set off. Ithaki House is about 50 minutes drive from Paphos International Airport. Ithaki House sleeps 5, with both bedrooms featuring en-suite bathrooms, and is equipped with all the amenities you would possibly need and some you would not expect.

For further information our website is www.ithakihouse.com & our digital guest book is bit.ly/IthakiGuestBook

The season when cyclamen growing wild out of rocks in Cyprus!

One of the most beautiful places to enjoy cyclamens in Cyprus are the rocky foothills above the Baths of Aphrodite, where

As we say farewell to another year, and welcome a new decade…

As another year comes to a close; I look forward to new beginnings, new opportunities, new friendships and setting new intentions for 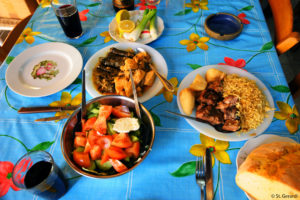 Traditional restaurants (tavernas) off the beaten track, around Polis Chrysochous

-Discover Cyprus’s unique flavours & tastes- “Where can we eat traditional Cyprus food?”, is the first question all of our guests ask.