Let us take your breath away!

A tragic story from the past…

The tragic story below is probably the first murder in Steni and is dated back to 1878. Ananias Anania and Kyriakou Theodoulou Nitti are our great grandparents. This story is a great insight of village life and how law and order was implemented nearly 150 years ago.

“Ananias Papagianni was the oldest child out of five in the family of Steni’s priest, Papagiannis Hadji-Argyrou, He was married to Mariou with which he had John, a 4 year old, Dimitris, aged two, and a son who was only a few days old. He was a strong and handsome young man, twenty-eight years old, though shrewd and proud.  He came from a wealthy family and perhaps that was what shaped his character, in the manner we mentioned above.  Many times his deeds, although not evil, caused a confrontation between him and his father who was a quiet and pious man.  A Turkish-Cypriot nicknamed “Kolas” lived in the neighbouring village of Agios Isidoros, which is almost conjunct to the village of Steni.  Perhaps the two young men were friends, since -in that era -the village’s inhabitants lived together in harmony; the Turks of Agios Isidoros spoke only the Greek language, something indicating that they were Christians that converted to Islam.  The Turk mentioned above regularly visited the house of two sisters in Steni, the two women being prostitutes.  This is not strange for that era since -many times -poverty compelled some women to resort to that lifestyle so as to survive, the condition of the economy in the countryside during the times of Turkish domination being most tragic as we know.

Perhaps several people in the village nagged about Kolas’s insolence, proceeding with such actions in their village, though no-one took any initiative to stop him.  Knowing the character of Ananias, he must have considered it an insult for the Christian inhabitants of the village.  So, he decided -we do not know if it was his decision or if some other persons influenced him -to give an end to this situation.

One night when Kolas visited the house, Ananias was waiting for him in the street, several meters away from it.  As Kolas was heading back, the two young men came to blows; no one knows what exactly happened and how long the fight went on.  At some point Ananias was found with a serious knife-wound in the chest.  The perpetrator fled the scene but the cries of the wounded Ananias awoke the village and everyone that could run chased the perpetrator, soon arresting him before he was able to leave the village.

They took him to the house of Hadji-Lampis Hadji-Savvas, the head of the village, and after tying him up with a rope they fastened him to the millstone of the oil-mill that was located nearby, sending someone on horseback to notify the police in Polis Chrysochous.  As it was expected, until the police arrived the perpetrator was savagely beaten by a few friends and relatives of the victim.

In the meantime others had transferred the victim to the village’s main street but he was already dead, the wound being very severe.  Meanwhile the policeman had come to the village, riding a horse and trying to approach the victim who was surrounded by all the villagers.  Quite a few were shouting that the perpetrator should be put on trial and be hanged by the neck, Cyprus already being considered as British soil for some months now.  A tragic figure in this scene was the wife of the victim, Mariou, mourning over her husband’s dead body while having recently given birth.

After the policeman confirmed Ananias’s death, he took the perpetrator and ordered him to walk in front of his horse, his hands tied, leading him to the police station of Polis Chrysochous.

The perpetrator was put to trial very soon and was convicted to twenty years of imprisonment, his action not being considered as premeditated murder.  He was transferred to the jails in the island of Malta to serve his sentence, seeing only the sea and the sky from his jail cell, as he was later related after his release.

Mariou in the meantime had raised her three boys going through a thousand trials and tribulations, knowing the difficulties that a woman -alone, with three children and without a husband -was facing in that era.  She raised her three sons, constantly advising them to be quiet, kind-hearted, and to avoid bad company, achieving her goals to the fullest.  Kolas, returned to his home after his release but now as a stigmatised murderer.  He could not keep any job and no one wanted him anywhere near.  He was rejected not only by the Greeks but also by the Turks of his village.  In order to survive he was forced to beggary in the region’s villages, including Steni.  As the proverb declares “time can mend things” and so many of Steni’s inhabitants started looking at Kolas as their fellow human being, though they did not forget that he was the murderer of a fellow villager of theirs, giving him whatever they could so that he could survive.

One day Kolas found himself before the house of Anania Ananias, the infant that Ananias Papagianni left behind him after his death so many years ago, who was married to Kyriakou Theodoulou Nitti.  Kyriakou was a woman who always gave to those in need and so she offered a piece of bread to the murderer of her father-in-law.  Her husband justifiably told her that it would be better to give that bread to their dog rather than to Kolas, knowing that the bread was offered to his father’s murderer.  Kolas heard the words of Ananias and said, word-for-word, “Ananias, don’t hold a grudge against me and hate me, your father pinned me down and would have killed me if I had not nailed him with the knife”, a detail that of course no one can confirm as being true.

Ananias’s heart softened -being a mild and peaceful man -and so a calmness was set in the hearts of these two men, both being victims of the circumstances since the lives of both of them had changed after the tragic event of 1878. ”

The story features on http://www.steni.org.cy/en/past-len

The black & white family photo is the only photograph we have of my great grandfather,  Ananias Anania.  He did not like to have his picture taken. Due to being blond with blue eyes, the eyes were always white on the photos so he refused to take any.  In this photo he is with 4 of his 7 children. The girl sitting on his left hand side is my grandmother Andromachi Anania

The season when cyclamen growing wild out of rocks in Cyprus!

One of the most beautiful places to enjoy cyclamens in Cyprus are the rocky foothills above the Baths of Aphrodite, where

As we say farewell to another year, and welcome a new decade…

As another year comes to a close; I look forward to new beginnings, new opportunities, new friendships and setting new intentions for 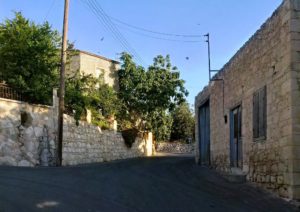 The beautiful villages around Ithaki House!

Steni, Peristerona, Lysos: These scenic villages around Ithaki House, oozing charm and Cyprus authenticity, are a must see no matter what the